Following the release of their debut album, All Sides Of A Circle, Bleach Blood hit the Boileroom to show the crowd in Guildford just what they’re made of.

Starting the night off with a bang are Dark Waters, an incredibly young band from Guildford that push indie to it’s heaviest limits. With catchy songs and enthusiasm, the boys left a strong impression that was unexpected, a very pleasant surprise. Whilst their crowd banter could use some work, it’s hard to find any flaws in such a young band honing their craft so finely at such an early stage in their career. The crowd may have been small, but this didn’t stop the band putting on a performance that set the bar incredibly high for the rest of the night. Look out for Dark Waters, because they truly are a force to be reckoned with in the future. 7.5/10 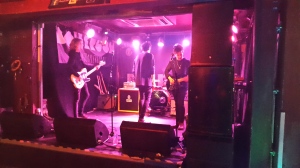 Up next, London based trio The Kenneths hit the stage running, playing frenetic punk to an unexpecting audience, the band follow the lofty heights set by previous support Dark Waters brilliantly. All formality cast to the wind, fun is the name of the game here. Crude humour and intense enthusiasm carry a Rancid-inspired set with ease, with The Kenneths stepping up to the plate and raising the bar even higher. Yet another band to watch from The Boileroom. 8/10 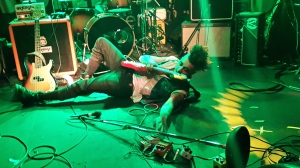 Unfortunately, whilst the next support Vault Holiday weren’t bad, the band failed to reach the precidents set by those that preceeded them. Much of their set was dull, sloppy and uninspired. However, the boys have clear talent and when the moments come, they truly shine. The performance smacks of a band with good ideas that haven’t quite figured out how to bring them together. The band could have benefited from a second guitar to back up their sound and provide some support for the lead vocalist/guitarist, and this led to the group seeming subdued in their work. Promise, but some more work and Vault Holiday could really impress. 6/10

Finally, last but not least, Bleach Blood finish the night off in style. The band roared through a short, sweet set filled with catchy choruses and charisma, leaving everybody in the crowd wanting more. Their sound is great, and it’s a crime to see them playing to such an empty room. Precision, tight playing and stage antics combine to create a well oiled pop punk performance that won’t be forgotten in a hurry. Whilst it could be argued the music was ever so slightly generic, they do it so well that it really isn’t a problem. It’s also worth mentioning that however you feel about the group on record, their live sound is something you can’t afford to miss. Beefed up and heavy, the soundman at the Boileroom deserves special commendation for this evening. But that’s not forgetting the band themselves, of course. Big things could come to Bleach Blood in the future, and I’ll be shocked if they aren’t climbing festival bills for years to come. 8/10