In 2015, the year of band maturation, we’ve seen many bands either soften their sound or beef it up in the hopes to gain more mainstream appeal. Bring Me The Horizon released their softest album yet to critical acclaim *ahem* (My review here), Bullet For My Valentine decided to return to their roots on Venom, a faster, more thrashy approach after their failure to invade the mainstream rock scene in 2013, and several others tried their hand at a new approach. However, if there was one band nobody expected this to come from, it’s Australian metalcore titans Parkway Drive. After a run of admittedly quite similar (but nonetheless solid) releases, the band have released by far their most diverse, experimental work yet, IRE. I went into this album with no expectations, and decided to utilise an unbiased, uninformed listen. Here’s what I thought. 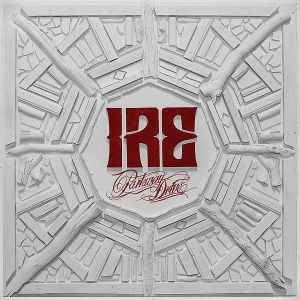 Writings On The Wall

The Sound Of Violence

Album opener Destroyer begins with an extended, epic build-up with repeated cries of ‘Destroy!’ before launching into an almost 80’s glam-like main riff, with lead guitars opting for a soaring, more accessible approach. Make no mistake, this is Parkway Drive, but from the onset, it’s clear this is a record striving to claim new ground, and Destroyer showcases a mission statement that is extremely indicative of the rest of the album. Duel guitars take duty over the track’s fantastic solo portion toward the end of the track, and leave the listener prepared for the ride to come. Second track, Dying To Believe is somewhat different. Wasting no time, the song smacks the listener in the face with an onslaught of riffs and barrage of pummelling drums. One of the grooviest songs on the album, the song also happens to include one of the finest breakdowns the band has produced throughout their career, a claim that cannot be made lightly in regards of Parkway Drive.

Moving onto Vice Grip, the album’s lead single, and it’s hard to see what anyone ever had against it. When the song was released, it’s fair to say people were not best pleased. However, after a few months of living with the track, it’s clear that people just weren’t ready for the new outlook Parkway Drive had on this new album. Put simply, the song is Parkway Drive played through a cock-rock filter, with more soaring guitar leads carrying the listener through the song, gang vocals flanking on each verse. A true air guitar anthem, I can tell you it was hard not to shred away sitting at this desk. Huge choruses and ambition make Vice Grip one of the best tracks on IRE, worth everybody and anybody’s time. Bringing the listener in with an almost eerie choir section, Crushed is one of the slower tracks the album has the offer. Dark, brooding melodies and vocal lines give way to a rap-like set of verses from vocalist Winston, and the song’s bouncy nu-metal vibe carries on throughout, easily making it one of the most interesting tracks of the band’s career.

Fractures is yet another ambitious, experimental song. Summing it up is difficult, but if you were to imagine Parkway Drive covering Iron Maiden, you’d basically have it. Galloping drums and guitar, a healthy dose of cowbell and gang vocals and that’s Fractures, a fantastic track and an avenue I’d love to see Parkway explore more in future. If there’s one criticism I could level at the boys for this one, it’s the fading outro. It may just be me, but I always feel it’s a bit of a cop out. Nevertheless, a brilliant song. Up next is Writings On The Wall, straight out of Flint, Michigan. Yep, this may well be the first time we see the infamous King 810 influence a modern metal band. The song’s poetic, whispered rap-like vocals put in a good showing here, and the song’s intensity really creates a thick atmosphere with a sparse use of guitars allowing the orchestrated sections to really breathe.

Bottom Feeder is another no-holds-barred barrage of riffs and intensity, choking the listener into submission with an onslaught of pure metalcore. It’s straightforward Parkway drive, but really it’s the first time on this record that can be said. Now, I’m not sure if it’s just because the run of the first seven tracks are so incredibly strong, but here is where the album just loses me a little. The Sound Of Violence is another typical Parkway Drive track, however the song is not without merit. A fantastic chorus and interesting vocal tradeoffs halfway through keep the listener interested, and the song is certainly not forgettable.

The clear single Vicious throws out another glam inspired banger, chock full of interesting guitar leads and pure, straight up heavy metal goodness, and the song’s Wherever I May Roam inspired intro is particularly effective here. Commencing with a ‘shouted word’ intro, Dedicated is arguably the heaviest song on the entire album, and is certainly one of the better songs on the album’s 2nd half. Repeated breakdowns give way to yet another one of the best the band has ever produced, Dedicated is a song definitely worth your time. Finishing off the album with shimmering acoustics and some seriously impressive duel guitar melodies is A Deathless Song, a slow burning outro that really brings the album to a close in style. However, at nearly the six minute mark, the track unfortunately extends past it’s welcome as time passes by. However, that could just be me, as the song is fantastic.

So, yet another experimental album in 2015. Did it work? Definitely, the boys in Parkway Drive have produced, for my money, the best, most varied album of their career. While not every single experiment worked in their favour, the album lays the groundwork for a follow up album that’s sure to set the world alight. The band’s scope may have been a little wide, but the album is a resounding success and the amount of promise here is truly mouthwatering. Watch out, metalcore. Parkway Drive just carved a new path for you to follow.