Four years after his last effort, Lars Attacks!, Nerdcore superstar MC Lars is back with his highly anticipated release The Zombie Dinosaur LP, an album that’s been on the cards now for several years. However, after such a lengthy wait, has it been worth the anticipation? 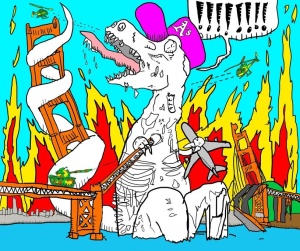 Kicking off the album strong is opener Where Ya Been Lars? II, a throwback to the This Gigantic Robot Kills opening track of the same name. A slower, old school hip hop backing accompanies Lars as he explains his absence over the last four years (despite his numerous E.P. and Demo releases), in a self referential tongue in cheek mission statement to bring the listener in on the joke, whether they’re an old fan or brand new. A great opener, and one sure to delight those who’ve been left in the dark over the last few years. Title track Zombie T-Rex proves to be one of the more straight up rap orientated tracks on the album, focusing on tighter rhymes and making a clear point, whilst not losing any of the trademark Lars goof. Whilst the chorus of the song, a humorous dinosaur-like scream from guest Stza Crack, works from a comedy stand point, it unfortunately takes away from the song a little too much to be considered a worthy chorus to the rest of the track. Otherwise, the song is catchy and Lars could be considered at his best here.

The extensively titled Sublime With Rome (Is Not The Same Thing As Sublime) might have the strongest, most relevant message of the album, mixing serious consumer politics with catchy, no holds barred ska punk backing. One of my favourites on the album, the song has staying power unlike any other. It’s not long before we reach our second throwback, the reference laden Hipster Mom¸ a proto-sequel to the rapper’s previous work Hipster Girl. At this point it’s clear Lars is making a strong effort to appeal to his older fans, throwing in references to songs such as Signing Emo and the aforementioned Hipster Girl. Musically, the song is another hit, with Lars’ focus on hitting notes with fans never getting in the way of proving his acoustic rap rock chops.

The slightly cringy Dragon Blood manages to claw back most of it’s dignity through incredibly well written, well put together lyrics and interesting rock roots backing track. The song is something of a rarity for myself, as someone who hates parodies to the point of loathing, Lars manages to keep the mood light and is not as heavily reliant on laughs as some. With a lesser artist, I’d have to delete the song from my iPod, but not this time. It seems this time around, this particular MC has a particular affinity for incredibly long song titles, as If I Were A Jedi (That Would Be Hella Awesome) rolls around with some of the nerdiest lyrics on the album. Riffing on Star Wars (and Harry Potter in one instance), Lars manages to keep the track personal. The chorus here might just be the best on the disc, and the skank-worthy rendition of The Imperial March toward the latter half of the song is a stroke of pure genius. By all means, a great song.

Never Afraid comes as what seems like a Lars Attacks! B-Side, but that’s no diss. The song is sincere, honest and one of the finest examples of the more contemplative sides of MC Lars. Speaking through the many literary references, the track manages to convey the feelings of insecurity and determination better than any work he’s produced so far, utilising a darker, more quiet backing track. It’s also worth mentioning the track features one of the best guest verses on the album, courtesy of fellow MC, Watsky.

The first skit of the album comes in the form of The Top 10 Things Never to Say on a First Date, a brief 105 second long track sampling Liam Lynch’s United States Of Whatever, albeit in a different tone and key, the piece is fun and lighthearted, providing laughs throughout it’s short running time. The Ballad Of Hans Moleman is another exquisite example of Lars lyrical ability, managing to pair down dozens of Simpsons trivia into a three short minutes, all whilst maintaining the incredibly catchy quality of his usual work. Fans of The Simpsons, beware, this track could well be better than The Bloodhound Gang’s Ralph Wiggum.

My personal favourite on the album comes from the Who Framed Roger Rabbit based The Dip, a bouncy, catchy, albeit slightly darker track about the rather grizzly demise of the shoe in the aforementioned Loony Toons picture, with a fantastic chorus and wonderful use of half-time changes at key sections. After this, we have the album’s second skit-track hybrid, Party With Lars, a brief, fun little piece focusing on absurd party antics, much to the potential despair of Lars’ mother.

Rounding off the album are the tracks Forgot About Jack and Triforce. Forgot About Jack is a slower, more contemplative piece about the life and work of Jack Kerouac, riffing on Dr. Dre’s Forgot About Dre for the songs choruses, it’s another strong addition to the album, but not the LP’s best. Triforce, however, is a personal, honest and pained track that sounds more like a heartfelt letter than a Nerdcore rap track, even IF it’s performed through a Legend Of Zelda lens. It’s an interesting track, and one that rings out the album on a more thoughtful note, and for that it deserves the utmost respect.

Overall, MC Lars’ fourth album effort is a good one, but could be argued to be the weakest of the set. Whilst the majority of the tracks are strong and contain some of his best raps to date, the formula is one that’s predicated on more of an ‘If it ain’t broke, don’t fix it’ ideology, and that’s fine, but when you’re four albums in, more growth than is shown on the album would certainly be welcomed. It’s something that I feel Lars tackled particularly well on Lars Attacks!, evolving his musical and lyrical style beyond that of the typical pop-culture centres tracks he generally writes. However, this is by no means a poor album, or anything like that. MC Lars gets away with this one, another solid album for his slowly expanding repertoire.